Wonder Woman is easily the best movie in the DCEU. Considering the competition, I’m sure you could interpret that as damning with faint praise. It’s not. This movie is great. It’s a shining light in a sea of otherwise dreary and mopey grey.

The movie: Young Diana, the princess of the island of Themiscyra, wishes to train with her fellow Amazons. Queen Hippolyta (Connie Nielsen) initially refuses, but, as Diana grows into a teenager, tells Antiope (Robin Wright) to train the girl harder than any Amazon before.

As a woman, Diana (Gal Gadot, who’s absolutely terrific) has become a great warrior. After training one day, she sees a plane crash off the shores of the island. Diana resuces the pilot, American Air Force Captain Steve Trevor (Chris Pine), on loan to British Intelligence against the Germans. The Germans discover the plane and attack the island, which goes poorly for all of them and a few of the Amazons.

Learning of “the War to End All Wars,” and fearing that war god Ares has returned, Diana and Steve leave Themiscyra, seeking the war. It doesn’t take them long to find it. When they arrive to find the small town of Veld under constant siege by the Germans, Diana is horrified by the Allies’ indifference and takes matters into her own hands. And it’s awesome. Mostly by herself, she lays waste to an entire German batallion. 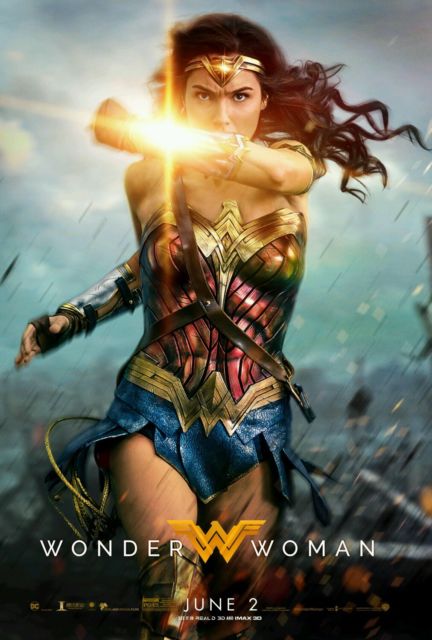 Diana, Steve, and their small band of misfits have to stop German General Ludendorff (Danny Huston) and chemist Dr. Maru (Elena Anaya) from unleashing chemical weapons and undoing the upcoming armistice. Even when they think they’ve succeeded, Diana discovers that Ares has indeed returned, and she has to stop the god of war to end the war.

The writing: The best part of the writing is the character of Diana (she’s never called “Wonder Woman” in the movie, btw). Credit Gal Gadot for a great performance: she’s fierce, sympathetic, anguished, and curious at the right times and in the right amounts. Good writing and acting went into the humorous fish-out-of-water scenes, as we see this world through Diana’s eyes. The most important thing is that DC finally got a hero right.

See, Diana is the inspiring hero who genuinely wants to help the helpless we should have gotten with Superman in Man of Steel. Instead, we got Sir Mopes-a-Lot. Diana cares about the oppressed, is appalled when the Allied soldiers won’t help, and opens a giant can of whoop-ass on the Germans. It’s tremendous, and if it doesn’t make you want to go out and punch an evildoer in the face, the problem is yours.

The first two acts of the story are really, really good. The third is the generic Fight Against the Big Bad (Ares, in this case). Based on the quality of the first two acts–especially the second–I expected more from the third. It’s not bad, but it’s underwhelming in context. Diana seems to accrue new powers (or more power) in the fight, I guess because she collected enough plot coupons or experience points to level up.

The third act not living up to the first two is all that’s bad here. The boss fight is fine, and the identity of Ares may surprise you if you weren’t paying attention. But this movie earns its accolades on the backs of the actors who turned in good performances, and a script with a damn fine second act.

Get two free chapters of my upcoming novel The Reluctant Detective, plus exclusive bios of the characters! Information is right here.